From September 29 to October 2, the Barony of Ynys Fawr hosted the 9th Great Southern Gathering (GSG). Originally conceived as a teaching weekend for rapier and then adding A&S as part of its core focus, GSG rotates annually between the Baronies of Innilgard, Krae Glas and Ynys Fawr. It is traditionally a largely casual weekend, with a full day of classes in A&S and rapier streams offered on the Saturday, and Rapier Guild Prizes and tournaments on the Sunday.

The event was stewarded by The Honourable Baron David de Derlington, at Orana Scout Camp, Roches Beach, Tasmania. There were approximately 60 attendees over the event, with most staying on site. The tokens for the event were cast by Lord David, with the Ynys Fawr lymphad and the triskelion of Great Southern Gathering on either side. We were blessed by the weather – it was worryingly wet on Friday night and Saturday morning, but during opening Court the rain blew away and the event was largely sunny from then onwards.

This year we had a wonderful line-up of teachers who generously offered their expertise to the eager students on Saturday, with classes continuing on into Sunday.

Viscountess Ingerith also ran another round of Medieval Masterchef. This included three components: redaction of a medieval recipe, a practical cooking session, and identification of medieval ingredients. 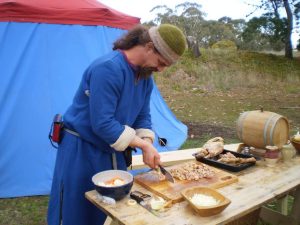 This year we were lucky enough to include a living history encampment in the program, in a somewhat experimental format which was wonderfully atmospheric. Nick and Tina of Lightwood and their family brought their full camp setup (more photos here), and Nick demonstrated and taught campfire cooking to a stream of visitors from the main building, and then fed us the resulting goose stew and goose pastries. They kindly hosted the bardic circle around the fire on Saturday night, and the home-brewed mead was plentiful for those so inclined. 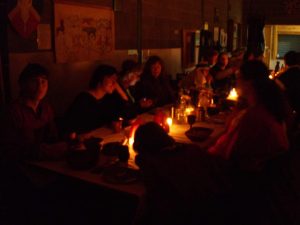 The other focus of the initial vision, of binding together the southern groups in friendship, was amply supported by the opportunities for chat and collaboration in the residential setting. There was delicious food provided throughout the event, including a generous feast on Saturday night. Head Cook for the event was The Honourable Lady Elena Anthony, ably assisted by Star King, Countess Beatrice Maria Malatesta, Sir Guillaume d’Oze, Lord Badric Anthony, and Sir Wulfgar Jarnsiða.

Sunday had the last of the classes and a line-up of further tournaments. The archery tournament took place under highly adverse conditions, with the participants spending almost more time chasing and replacing targets than shooting. Lord Ren Raw provided a masterful demonstration of shooting against a high wind, taking out the competition with 130 points. Lady Mariot de Bonnay and Lord Ranmor Argul were second and third.

The Defender of the South armoured tourney had five entrants, and was held as a round robin, played twice for ten rounds, and followed by a best of three final between Sir Wulfgar Jarnsiða and Baron Gilbert Krae Glas. Baron Gilbert was victorious. His reward for the victory was a standard, which was not present at the event (we suspect that the recent activity of pirates which has plagued the Kingdom may have had something to do with it), and will be presented at a later date.

After lunch, the thirteen rapier combatants present fought two tourneys, as proposed by Viscount Aylwin Greymane. First was the Queen’s Field of Grace, being held for the first time in Ynys Fawr. It was fought as an open challenge melee in which the fighters, bearing tokens of a landed Baroness (past or present) as representatives of the Queen, contest to display the greatest grace and courtesy on the field. The joint winners, chosen (with great difficulty) by Baronesses Anna and Adelindis, were Duchess Mari Alexander and Lord Seumas Gaskin. The second tournament was fought as a Warlord Team Tourney. The combatants started as a team of two (or more) and contended upon the field. Each winning team absorbed the losers into their crew. After many entertaining displays of courtesy, prowess and humour upon the field, Maestra Lindoret of Bryn Myrddin was the victorious warlord.

There were no Guild Prizes fought, but a mock Guild Prize was held near the end of the event as an opportunity for a rapier fighter unfamiliar with the Guild Prize system to be introduced to its requirements. The explanations provided by Maestra Lindoret and Master Gomez were also much appreciated by some in the audience who were likewise unfamiliar.

An Arts and Sciences competition was run by Baronial A&S Officer Lady Alessandra di Fiore di Piero della Mora, with the theme being personal heraldic display. There were three entrants, of whom the winner was Lady Elizabeth la Chatte from Krae Glas, with her hood, buckler and banner displaying elements of her device and badge across different media.

The formal part of the event was rounded out by a boffer tourney, marshalled by Baron Gilbert Krae Glas, and won by Floki Snorrason, before closing Court. In Court, the suspected pirate crew of the Black Dolphin, who had been placed under house arrest for the duration of the event by Master Yevan, eventually persuaded their accuser (through the intervention of their Baron) of their claim to be “legitimate fishermen”. The suspected pirates were the inspiration for not one, but two filk songs written and performed by the Honourable Lord Karl Faustus von Aachen during the event, to the great delight of the audience.

New to this gathering, and proposed by Baron Gilbert Krae Glas, was a discussion on the GSG Charter, which took place after closing court. The discussion focused initially on identifying possible clarifications to and problems with the wording of the current charter, and suggesting potential solutions. Baron Gilbert also suggested the need for a mechanism for review, update and ratification of the charter to be included. A more in-depth discussion followed in which the need to enshrine the original vision in the charter to ensure that the event remains true to itself was also identified, and a potential model for review, update and ratification was hammered out. This will be taken back to the member Baronies, and a working party formed to build on the foundation laid down in these discussions. We were grateful to all those present for their participation, in particular Viscount Aylwin and Viscountess Ingerith, who, as founding members of GSG, were able to give us all an enlightening history of the event and more insight into the original vision.

It was a thoroughly entertaining and inspiring event, and we all look forward to the 10th Great Southern Gathering, to be held in the Barony of Krae Glas in 2018. Huzzah!