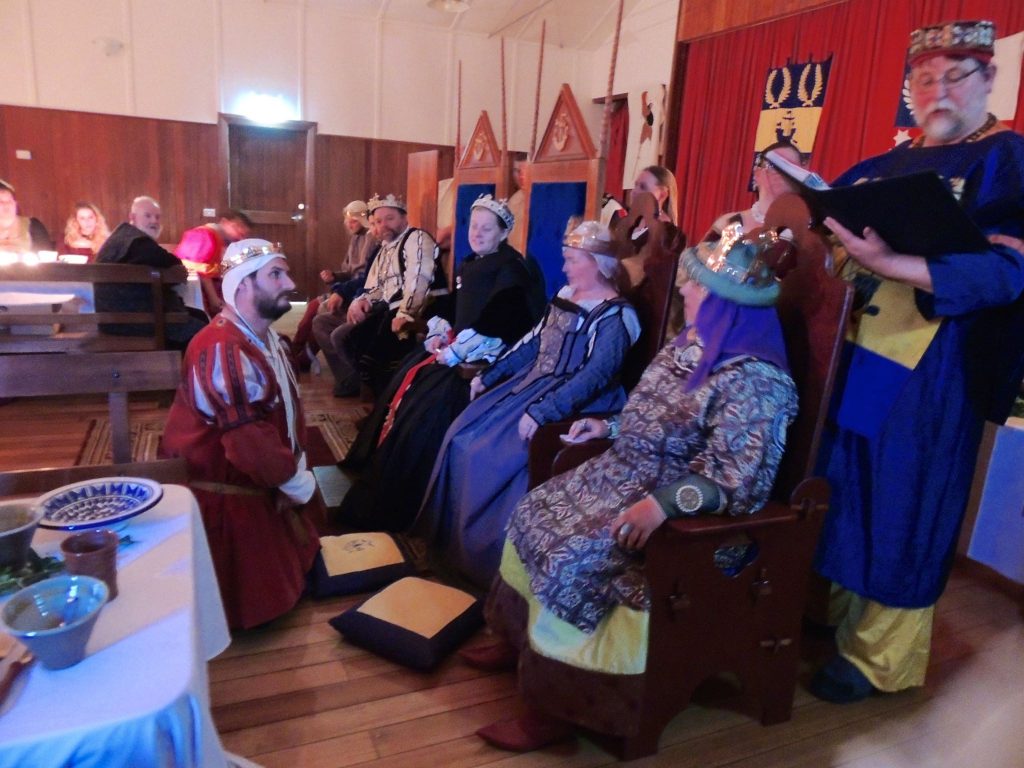 Awards are an important part of the SCA. We are a volunteer organization, and the way we are “paid” is by the positive feeling we get by contributing to the SCA, whether at the local level, in the kitchen, as a kingdom officer, etc. Awards are a public “Thank You” or acknowledgement of accomplishments. (Although they don’t take the place of a personal, individual, word or note – so don’t forget to say “Great Event” to an event steward or send a “Loved your Feast” email to a cook!). Awards are also an encouragement to a person to continue in the same vein or direction. Kingdom and society Awards are given at the pleasure of the King and Queen of Lochac, and Baronial awards are presented by the Baron and Baroness of Ynys Fawr, or but the They can’t be everywhere, or see the contributions of every member of the populace. The only way They know if a gentle is worthy is if They receive recommendations for that person, recommendations from people such as you.

Click this link to go to the Baronial Award Recommendation Form.

How to recommend someone for an award

Step 1: What award/s does the person have currently?

It’s a good idea to check if they already have the thing you want to recommend them for.

Ynys Fawr Roll of Arms This is The Baronial Order of Precedence, it lists of everyone that has ever received an award in the Barony (and the shire before 1993) of Ynys Fawr. This lists includes Baronial, Kingdome and Society level awards

Canon Lore Is the Kingdom order of precedence, and just lists Kingdom and Society awards

If they are not on a list, They might be under a different name, or they may new to the SCA then recommending them for an Award of Arms nice one to start with.

Step 2: What award do you want to recommend them for?

Lochac Awards Reference Guide This gives you an idea of what awards there are grouped by type of award and ordered by level of distinction. Once you’ve got an idea of the award, check the link below for more info.

List of Every Kingdom  and Society award available in Lochac: This is a list of every award, with links to more information about each one

Step 3: Send in your recommendation

What to put in your recommendation?

The short answer is “As much as you can” When sending your recommendation, include as much information about yourself and the person your are recommending as you can.

Baronial Recommendations go to the B&B of Ynys Fawr

Click this link to go to the Baronial Award Recommendation Form.

If you are not sure what award, just select “other”, provide examples in your reason why sections, that Their Excellencies will know what to do with it.