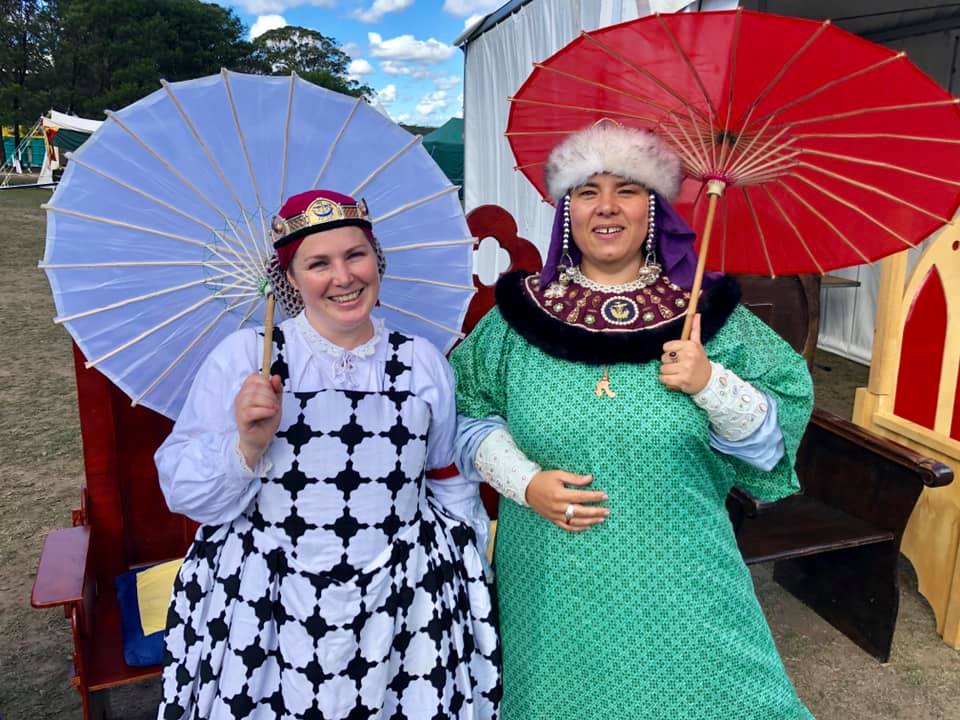 It has been a busy couple of months, with Adelindis joining Anna and a number of the populace at Rowany Festival. We would like to open this letter with news of that great event, in particular of Sir Guillaume d’Oze, who distinguished himself both as the Queen’s Champion and leader of Her Guard, and in being asked to join the Order of the Pelican. Huzzah! He has chosen to be elevated at an event in Ynys Fawr, details to be confirmed later in the year. In other news, Baroness Anna was successful in her Free Scholar Prize, Lord Erlendr Tryggvason distinguished himself on the field in the Pas d’Armes and was asked to fight with the Royal Guard in the concluding pass, and Sir Wulfgar Jarnsida fought well and honourably as our representative in the Fire Tourney. Many of our members contributed once again to the success of the Festival, with THL Declan of Drogheda and Lord Perran of Lyskeret rendering help to the Gate, Baroness Anna as a deputy to the Constable and as a voice herald, and Sir Oze, THL Elena Anthony and Lord Badric Anthony catering for the Roses Tea. We were also pleased to see newcomer Robert, attending his first event, throwing himself into many aspects of Festival life, including taking on volunteer shifts in different areas.

Thanks to all those who attended the St Gildas stall at the UTAS O Day at the end of February – in addition to both of us, we had Sukeyoshi Matsutani, Lord Erlendr, Lady Arabella of Ynys Fawr, and THL Elena. The stall was successful, with a number of people signing up for more information and several new members joining up, at least one of whom is regularly attending trainings and social nights – welcome! The social nights have been a successful initiative of the Chatelaine to bring new and old members together in an informal setting, with three having run so far. Our thanks to THL Elena for running these. We are also encouraged to see the increasing attendance at all of the trainings this year – we have seen new and returning members growing the numbers at rapier, armoured combat, dancing and archery, as well as coming along to social nights and events, and we look forward to seeing this trend continuing.

In news of officer changeovers, the office of Baronial Marshall changed at St Sebastian’s, with Lord Anselm da Calabria handing over to Sir Oze. Thank you to both gentles for your service in taking on this important role. We would also remind our populace that our Chirurgeon and Herald are both still seeking replacements. The current Chirurgeon, Lord Perran, has come to the end of a four year warrant and will be stepping down at Little Bit of Rapier, leaving a vacancy. However Dromond Herald is one of the Greater Officers and must find a successor to pass the role onto – please talk to Master Hrolf Herjolffsen for details.

The Canton have held two successful events since our last letter. In the fifth St Sebastian’s archery tournament, held on March 30, congratulations must go to Thomas Loxley as the overall winner, to Thomas Loxley and Guinevere Winter Marsh for winning the couples shoot, and THL Elena as the winner of the A&S competition. The Canton also held a small but successful LAVITSEF, a casual camping event run as a local alternative to Festival, for the second time over Easter. Upcoming is Saturnalia, on a date to be advised, but with the return of last year’s feast steward Olafr confirmed. The Canton is currently advertising for the position of Hospitaller, applications close May 14. Please speak to Canton Seneschal THL Karl Faustus von Aachen or Baronial Chatelaine THL Elena for more information. And finally, we were pleased to hear the Canton has achieved full branch status, announced by the Crown at Rowany Festival.

Finally, we would like to give our thanks to the members involved in replacing the two dangerously faulty stoves in the hall, especially Master David de Derlington, Baroness Drusticc inigena Eddarrnonn, THL Elena and Sir Oze. We look forward to the new stove’s first use at the feast for the sixth Little Bit of Rapier, to be held at the end of May in conjunction with the Autumn quarterly tourneys. We are pleased to already have bids in the pipeline for the Winter and Spring quarterly tourneys. And, in news of the broader Kingdom, we are sure all of the populace join with us in anticipation of the results of the May Crown Tournament, to be held in Darton on 10-12 May.

Yours in service to the Crown and the populace of Ynys Fawr,